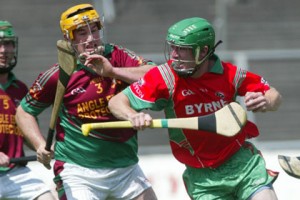 Peter Durnin was in brilliant form for Kiltale as they overcame Killyon by ten points at a sunny Pairc Tailteann.

Dual star Mark O’Sullivan got the winners off the mark with a fine point. Kiltale held a 0-7 to 0-3 advantage after twenty minutes. The impressive Durnin struck for his first goal to leave it 1-7 to 0-3. Killyon then enjoyed their best period of the game. Three points from David Raleigh and two from Keith Keoghan put them in a good position before the break. Kiltale went in with a slender 1-9 to 0-9 lead.

The second half began in lively fashion when Mark O’Sullivan had a brilliant effort saved by Killyon keeper Stephen Quinn. Three points from Durnin and one from Stephen Donoghue left Kiltale with a 1-13 to 0-10 lead. Keith Keoghan gave Killyon a lifeline when his long range free found its way to the Kiltale net to leave it 1-13 to 1-11. But within three minutes Durnin had the sliothar in the Kiltale net twice and the game was as good as over. James Kelly put the icing on the cake with Kiltale’s fourth goal in the final minutes.