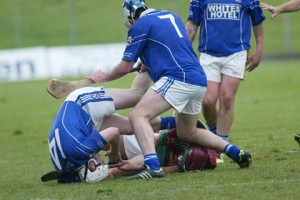 After fifteen minutes Kiltale led by 1-5 to 0-2, their goal coming from veteran Johnny Donoghue. Jack Regan crashed a close in free to the Olygate net and further points from Regan (2) and Mark O’Sullivan had the Meath champions in cruise control leading 2-8 to 0-2 after 25 minutes. The Wexford champions staged a mini revival scoring three points in the last five minutes all from the hurl of midfielder Fergal Doran. Kiltale led at the interval 2-8 to 0-5.

It was a different Oylgate Glenbrien team that took to the heavy sod at Navan for the second half. Within ten minutes the Wexford men had the gap down to a point with two goals and a point from the excellent Jamie Reck. Kiltale replied with a brace of points from Jack Regan. On the 20th minute half back Anthony Forde raced through the Glenbrien defence to score an inspirational point and the Meath men were 2-12 to 2-9 in front.

But from there on Olygate took over. The outstanding Padraig Doran levelled the game with a goal and points from the Dorans, Fergal and Padraig had the Wexford men two points to the good. Jack Regan and MJ Reck exchanged points before the final whistle as Olygate Glenbrien went on the win by two and advance to the Leinster decider.