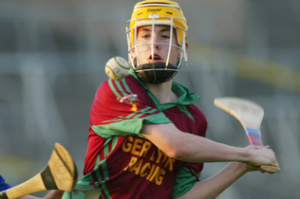 Kiltale won Division 2 of the Leinster U15 Hurling league last Friday night in Hawkfield in Newbridge defeating Maynooth in the final.

This competition was played in three different venues Tinyryland in Carlow,Dunganny in Meath and Hawkfield in Kildare on Friday nights.

Kiltale had to fight hard to win this game but with Iarla Hughes and Jack Farrell dominating around midfield and Cathal Brien and Jack Quinn outstanding on the full back line Kiltale were always in control in this game.

Ross Ryan in the full forward line scored an amazing three goals and five points and was a constant threat to the Maynooth defence and his twin brother Ronan was outstanding at centre back.

Further points for Kiltale from Iarla Hughes and Brian O ‘Reilly and Cathal Ryan gave Kiltale a cushion going into the final quarter when Maynooth piled on the pressure and Liam Gilsenan in goals brought off some fine saves.

Kiltale had other great performances from Jack Cummins at midfield and Lee Corcoran and Conor Mc Nally up front and Andrew Jackson the team captain showed great leadership at centre forward.

After the game Andrew Jackson accepted the trophy along with Leinster gear bags from Syl Merrins and Lester Ryan of Leinster Council.