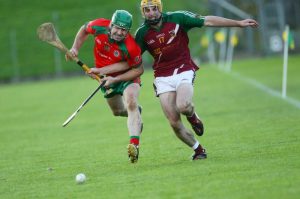 Kiltale made it three-in-a-row with a minimum margin win over Killyon in the Ted Murtagh Meath SHC final at Pairc Tailteann on Sunday.

The champions bid to retain the Jubilee Cup was severely tested. Despite falling behind in the third quarter Kiltale came good when the pressure came on.

County man Jack Regan did not start. He was benched with a heavily strapped thigh. Introduced in the 56th minute, he delivered what proved to be the match-winning score from a 64th minute free.

Only a goal was good enough for Killyon. A point from sub JJ Gilsenan closed the scoring with Killyon’s bid to end a gap going back to 2005 was over.

Kilyon regained the lead through Peter Durnin’s 44th minute free, 0-13 to 1-9, and were not headed again.

A Calvin Ryan point from inside his own 65 levelled matters. Kiltale wing-back James Kelly responded with his second score.

Kiltale edged matters for the remainder. They passed up chances to flatline the contest, but Killyon were off target twice in the final minutes. First, Keoghan was wide from a free within his range. Then Adam Gannon had a goal attempt bravely smothered.

Kiltale had the backing of the elements in the first-half, defending the town end. Within a minute of the off the defending champions had two points on the board from play. Ross Ryan was first to register with wing-back James Kelly getting the second.

Driven on by leading scorer Keith Keoghan, Killyon worked their way back into the game. The scores were tied for the first time when Keoghan sent over from play in the 13th minute.

Ross Ryan posted three three points from play in the opening half. The first of them put Kiltale back in front approaching the mid-point of the half.

The scores were tied four times in the first-half, the final one when Cathal McCabe sent over for the holders and left it 0-7-each after 22 minutes.

The champions were a bit more wasteful than the challengers in the first 30 minutes with Cathal McCabe passing up a goal chance midway through the half.

Keoghan provided the final assist for the opening goal with a crossfield ball that unhinged the Kiltale defence and allowed Adam Gannon to net in the 23rd minute, 1-7 to 0-7.

Two Durnin frees trimmed the deficit to the minimum. Adam Gannon replied for the challengers before pointed with Keoghan’s assistance. Durnin (free) left Kiltale trailing by the minimum, 0-10 to 1-8, at the break.