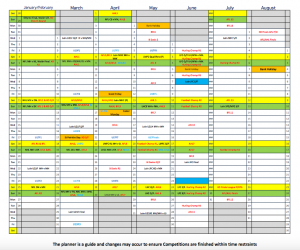 Please see below note from Meath CCC with regard to the attached Meath GAA Planner for Jan-Aug 2017.

A Chairde, attached is the 1st Fixture plan for 2017. You can download a copy here.

We would ask that the following points are noted.

CCC An Mhí wish all our Clubs the very best on and off our sports fields for 2017.