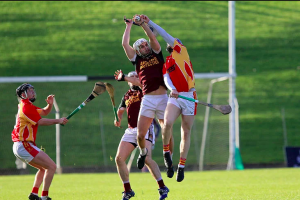 Kiltale (Meath) proved too good for The Harps (Laois) in this quarter-final fixture at Pairc Tailteann on Saturday afternoon but the win had its price.

The Meath SHC champions lost Mark O’Sullivan to a straight red card in the fourth minute of stoppage time at the end of the game following an incident that also involved two Harps’ players. It bemused those on both sides.

That harsh note means that the wing-forward is set to miss the semi-final clash with Ballyragget (Kilkenny) on November 18 at a Meath venue.

Kiltale led all the way apart from the early minutes. Not for the first time in a hurling match, both sides scored more when playing against the elements.

Aside from the scoring exploits of Jack Regan (1-9), three important fetches near the end of the game by James Kelly – one on his own goal line – were memorable features of the win.

In addition the work rate of Peter Durnin and Anthony Forde (the latter especially so in the opening half) also caught the eye.

Padraig Delaney was The Harps main scoring threat but the Durrow-Cullahill outfit weren’t helped by seven first-half wides when playing into the town goal.

Within 30 seconds of resumption, The Laois IHC semi-finalists were boosted by a Brian Clancy goal. The full-forward beat Ollie Regan to Eoin Clancy’s delivery and the deficit was down to four points. The Kiltale netminder might have been more proactive in dealing with Clancy’s speculative effort.

By the 36th minute the gap was trimmed to a goal before Kiltale responded with five points in as many minutes to lead by 1-18 to 1-10.

While the elements subsided somewhat, The Harps made another effort to cut the gap. They got it down to five points in the 54th minute when sub Ross Young left it 1-20 to 1-15.

That score proved to the The Harps’ swansong before Peter Durnin (following the first of James Kelly’s catches) and Mark O’Sullivan closed the scoring.

With the backing of the wind and the sun, The Harps pointed twice in the opening three minues. Padraig Delaney’s free was followed by a John Brophy effort from play.

By the fifth minute the scores were tied for the only time in the first-half when Jack Regan (free) opened his account to go along with Cathal McCabe’s opener for the Meath SHC winners.

Kiltale upped a couple of gears with four scores on the spin. Gavin Comerford’s point from an acute angle temporarily halted Kiltale’s progress.

Then in the 15th minute James Kelly provided the assist for Regan to net at the hospital end to leave the board reading 1-6 to 0-3.

A Regan 65 completed Kiltale’s first-half tally. It was Conor Dunne – with his second pointed free from inside his own half – from close to his own 45 who left The Harps double scores in arrears at the break, 0-7 to 1-11.