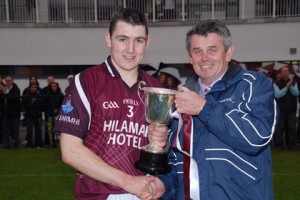 Westmeath came from four points down in the first period of extra-time to defeat neighbours Meath in a thrilling Leinster U21 ‘A’ HC final at Trim last night.

Having received a bye into the final, the visitors scored 1-3 without reply in the last eight minutes to deny the Royals victory. Cormac Boyle was Westmeath’s match-winner, accounting for 1-1 of that tally.

A goal from Barry O’Meara had handed Westmeath the early initiative before Meath fought back to go into the break on level terms, 0-9 to 1-6. The Lake County regained the lead in the second half, only for Meath’s top scorer Keith Keoghan to send the game to extra-time with an injury-time free (1-13 to 0-16).

When full forward Anthony Healy netted to give the Royals the lead for the first time at the end of the first period Westmeath looked to be in trouble, but Boyle’s heroics ensured them of victory.

Kiltale were ably represented by team captain Shane McGann in goal and Willy Mahady at centre-back, as well as Padraig Kelly who did not feature in the match, but sadly the home side were on the wrong side of the scoreline after an extra-time thriller. 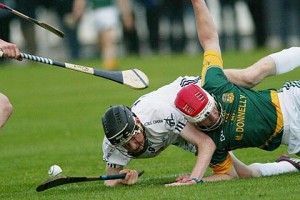 Kildare's Eanna O'Neill and Meath's Neil Heffernan go to ground to claim possession during the Leinster U21 "A" huling final at Trim. Photo: HoganStand.com

Meath 4-13, Kildare 1-16: Neil Heffernan was the star turn with four goals as Meath claimed the Leinster Under 21 H A title with a win over holders Kildare that was more convincing than the scoreline suggests.

When the Trim lad bagged his fourth goal midway through the second-half the scoreboard read 4-10 to 0-10 and the outcome decided.

Kildare substitute Gavin Sutherland netted from a 60th minute free for what proved to be the final score of the game after Ciaran Joyce was deemed to have over-carried the sliotar.

While Heffernan took the scoring plaudits, he was assisted by eight team mates who posted 0-13 between them. All six forwards registered as did midfielders Keith Keogan and Mark O’Sullivan. Substitute Noel Fagan also got off the mark to leave it 4-13 to 0-15 after 58 minutes.

On the Kildare side full-forward Martin Fitzgerald put 0-6 to his name but only scored once from open play. Conor Kenny was the only one of the visitors’ starting 15 to put over more than a single score from play.

The three Kildare substitutes chalked up 1-4 between them with Leo Quinn (two) and Danny Butler adding to Sutherland’s efforts.     Kildare hit the front in the opening minute when Fitzgerald landed a ’65’. Meath responded positively with team captain Michael Dunne and his Dunboyne clubmate Alan Watters combining to set Heffernan’s first goal.

Meath were never subsequently reeled in and before the fifth minute elapsed Heffernan netted again and it was 2-2 to 0-2.

Kildare did their best to keep within striking distance of Kevin Dowd’s charges and Fitzgerald’s only point from play ignited a Lilywhite revival.   By the 29th minute they had halved the deficit while Meath ‘keeper Shane McGann had saved well from Fitzgerald during the opening period.

Substitute Quinn landed Kildare’s final score of the half before Heffernan got in for his third goal, in the 30th minute, and it was 3-5 to 0-8 at the break.

Meath were quickly into their stride from the restart with points from Anthony Healy, David Raleigh, Barry Slevin (free) and Mark O’Sullivan.   Two Fitzgerald points from from placed balls (a ’65’ and a free) temporarily halted the Meath gallop. In between those scores Keith Keoghan found the range from distance with a free.

Then came Heffernan’s fourth goal and provincial honours were in the bag for Meath.