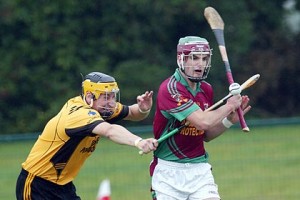 Kiltale's Mark O'Sullivan gets in his strike as Dunboyne's Paul Fagan tries to block during the Meath SHC quarter final replay at Trim.

Unlike the drawn encounter six days earlier, when Kiltale forced extra-time and later a replay, Dunboyne were on the back foot from the off and never led.

However the sides were level twice in the early exchanges. Damien Dixon’s ninth minute point made it 0-3 to 0-2 and Kiltale were never reeled in.

Durnin’s first goal came courtesy of a 20-metre free in the 13th minute and left the board reading 1-3 to 0-2.

Dunboyne did manage to cut the gap to a goal on two occasions in the second quarter. First when Michael Dunne pointed and then in the 27th minute through Michael O’Grady.

In between those scores Kiltale moved five points clear with Durnin punishing Dunboyne from play and frees.

A more economical Kiltale put a significant desposit on a semi-final meeting with Kilmessan in the run up to half-time.

James Kelly’s 28th minute goal doubled Kiltale’s advantage. Though Neil Hackett replied with a point from play, the team in maroon and green closed were ahead by double scores, 2-8 to 0-7, at the break.

Within seconds of the restart Durnin placed Mark O’Sullivan for Kiltale’s third goal. Points from Gary Watters and Hackett (free) offered a glimmer of hope for last year’s runners-up.

Brendan Dixon fired in Kiltale’s fourth goal in the 40th minute to shut the door on Dunboyne and the board read 4-8 to 0-9.

Kiltale ‘keeper Shane McGann saved well from Neville Reilly in the 47th minute while Durnin continued to punish Dunboyne with scores from play and placed balls.

When Hackett placed Stephen Moran for Dunboyne’s goal in the 54th minute, Kiltale still held a double scores advantage, 4-10 to 1-11.

Durnin completed a memorable afternoon for Kiltale with his side’s fifth goal, in the 58th minute, when placed by experienced substitute Cathal Sheridan.