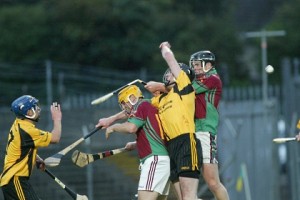 Kiltale advanced to the semi final of the Meath Senior Hurling Championship with a comprehensive win over St Peters Dunboyne at Pairc Tailteann. The winners have now set up a date with four-in-a-row chasing Kildalkey.

The game was delayed for a half-hour to accommodate extra time in the IHC quarter final between Dunderry and Blackhall Gaels. The delay seemed to have affected Kiltale and with five minutes gone Dunboyne were 1-3 to 0-0 ahead. After a minute of action full-foward Barry Watters got in for a goal, before adding two points – and along with a fine effort from Sean Moran Dunboyne were six points up.

Kiltale settled and got the next four scores with points from Ian Douglas, Jack Regan, James Kelly and Stephen Donoghue. Jack Regan sent over four frees for Kiltale in the closing ten minutes and the teams went in level at the break 0-8 to 1-5.

Kiltale had this game wrapped up in the opening ten minutes of the second half. Last years beaten semi-finalists had 1-4 registered before substitute Gary Watters got Dunboyne’s opening score of the half. Jack Regan started the scoring spree with a point before Mark O’Sullivan got Kiltale first goal. Further scores from Regan, Sullivan and Philly Garvey put Kiltale ahead 1-14 to 1-6.

The lead was out to eleven points when O’Sullivan sent a sideline cut over the bar and Peter Durnin got his teams second goal. Gary watters got a consolation goal for Dunboyne with time almost up as Kiltale went on to win with ease and set up a mouth watering clash with championship holders Kildalkey in the semi final.