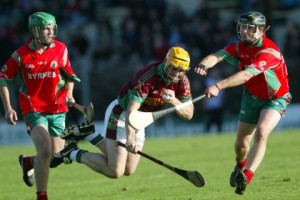 Kiltale’s Johnny Donoghue takes a tumble as Killyon’s Conor Foley and Paddy Ryan close in during the Meath SHC Final at Pairc Tailteann.

O’Sullivan was the game’s top scorer from play with 1-3. His goal cushioned Martin Ennis’ men against a late Killyon rally that might have forced a replay but for some sterling defensive work by the new holders of the Jubilee Cup.

When O’Sullivan steered Peter Durnin’s delivery to the net at the town end it left four points between the sides, 1-8 to 0-7.

O’Sullivan was prominent in attack as Kiltale widened the gap to five points on six occasions. When Jack Regan, who was to the fore in the opening half, brought his tally 0-7 with a 56th-minute free, six points separated the sides, 1-14 to 0-11. This made the young corner forward the final’s top scorer.

The timely intervention of David Donoghue prevented Killyon from getting in for a late goal that would have forced a replay.

This is Kiltale’s fourth SHC title and first since 2007 – a feat achieved despite losing the opening two fixtures (Kilmessan and Kildalkey) in the group stage.

Killyon went in pursuit of their first SHC title since 2005, and eighth in all, on the back of six straight wins in this year’s campaign.

At the game entered the final quarter Kilale ‘keeper Shane McGann fielded David Raleigh’s delivery well under pressure to prevent the concession of a goal.

Kiltale lined with Ian Douglas and Anthony Forde at midfield while Killyon’s Pauric McKeown and David Kennedy were in direct opposition.

Jack Regan landed an impressive opening point for Kiltale from close to the stand at the hospital end in the second minute.

By the 13th minute the scores were tied for the second time following points from Regan (free) and Stephen Donoghue.

Regan’s second point from play, another excellent effort – this time from the opposite side of the field – restored Kiltale’s lead, 0-4 to 0-3, in the 17th minute,

Kiltale passed up a goal chance when Peter Durnin lost possession in front of goal. However, Martin Ennis’ men maintained momentum with points from Mark O’Sullivan and Regan (free).

Killyon managed their first point in a quarter of an hour when David Raleigh sent over his second score from play in the 23rd minute.

A David Kennedy delivery nearly led to a Killyon goal but Shane McGann and the Kiltale defence averted the danger.

Killyon ‘keeper Stephen Quinn turned a Regan goal attempt out for a 65 which eventually led to Stephen Donoghue’s second point.

Philip Garvey, operating in the half-forward line, made it 0-8 to 0-4. A Keith Keoghan effort ensured Killyon were within range of their opponents with 29 minutes gone.

David Raleigh played a supporting role as Adam Gannon posted the final score of the half that left Killyon 0-6 to 0-8 in arrears at half-time.

Within 40 seconds of the restart the margin was down to the minimum when Raymond Massey sent over a free from about 40 metres. Then came the game’s decisive score.