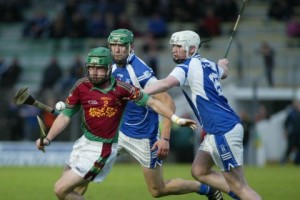 Kiltale were decisive winners in the second Ted Murtagh Clothing & Footwear Trim SHC semi-final at Pairc Tailteann on Saturday evening when ending Kildalkey’s bid for a fourth Jubilee Cup success in a row.

The decisive moments occured in the ten minutes either side of half-time when Kiltale moved from being on level terms with the champions to being seven points clear.

The game’s only goal arrived three minutes after the resumption with Mark O’Sullivan finishing to the net at the town end after Peter Durnin’s effort was blocked by Kildalkey full-back Stephen Forde.

That left 1-11 to 0-9. Though Paddy Conneely pulled a point back from a free, White flags raised by Anthony Forde, James Kelly and Durnin was Kiltale’s response.

Following the latter score the board read 1-14 to 0-10 with 40 minutes on the clock and Kiltale kept Kiltalkey at arms’ length from there to the end.

Kiltale – caught by an O’Mahonys’ smash-and-grab raid at the same stage last year – were only in arrears once, in the opening four minutes, on this occasion.

Now they looked forward to their first final appearance since their 2007 success over Kilmessan.

Six different players contributed to Kiltale’s tally with all bar four of their scores coming from play. Nine of Kildalkey’s scores were from placed balls.

A tigerish Kiltale defence, with Padraig Donoghue a central figure, ensured there was no way back for Pat O’Halloran’s men.

The introduction of Derek Doran in the 36th minute didn’t pay the required dividends on this occasion as goals eluded Kildalkey.

Mark O’Sullivan put 1-2 to his name while Durnin finished with four points from play. No Kildalkey player managed more than a single score from play while Kiltale wing-back Anthony Forde managed two such scores.

The sides went score for score in the opening 16 minutes with a Pauric Keogh point from play getting the proceedings underway.

Kiltale replied with points from Cathal McCabe and Mark O’Sullivan to hit the front for the first time four minutes in.

Martin Ennis’ men hit the front on four subsequent occasions in the opening 25 minutes but never by more than the minimum margin.

With Paddy Conneely keeping the challengers in check with pointed frees the side were level five times in the opening 22 minutes.

Kildalkey’s Noel Kirby had his side’s best goal chance of the opening half in the 12th minute when his close range attempt was smothered by Kiltale ‘keeper Shane McGann.

Kiltale enjoyed a productive spell when posting four points on the spin in the second quarter to leave it 0-9 to 0-5 with 28 minutes gone.

Mark O’Sullivan’s second point of the half was the pick of those scores. He cut in from the left before registering.

A Kirby effort from play and Conneely’s fourth pointed free of the opening period halved the deficit before Regan closed the first-half scoring with an excellent effort from play.

That left Kiltale leading by 0-10 to 0-7 at the interval having played with the breeze in the first 30 minutes.