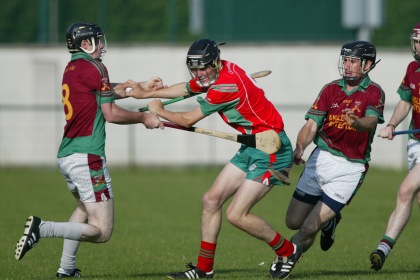 Kiltale were in a league of their own here as they made it three wins from three in the campaign. Killyon lost their opening two games, but only by a combined total of three points.

The sides exchanged points in the opening 75 seconds, but Kiltale quickly regained the lead and by the end had nine different scorers from play.

Only Mark O’Sullivan’s goal separated the sides (1-14 to 0-14) in last October’s SHC decider. In light of narrow defeats in the opening two round more was expected of Killyon here.

Jack Regan put the disappointment of the Leinster Under 21 H A loss on this pitch three days earlier to score 0-8 including some delightful efforts like the one from close to the left-hand sideline that made it 0-2 to 0-1.

A tally of 12 wides to Killyon’s seven may give the Jubilee Cup holders something to work on. It was only in the run-up to half time that the gap in the scoreline became significant.

Four pointed Keith Keoghan frees kept Killyon in contention during the opening 25 minutes at which point it was 0-4 to 0-9. By half-time the gap was up to nine points, 1-11 to 0-5 and continued to widen on the resumption as Kiltale doubled their first period tally after the interval.

The second goal arrived at the country end in the 37th minute when Peter Durnin deftly connected with Eamonn Ryan’s delivery from distance and steer the sliotar past Stephen Quinn.

By the 40th minute it was 2-16 to 0-6. Kiltale tagged on six points to Killyon’s three in the final third of the hour as the fizz evaporated from the fixture.

Killyon’s final score from play was a point by corner-back Chris Reilly from the middle of the field early in the final quarter as the fixture drifted to an inevitable conclusion.

Operating on solar power when playing into the town goal, Kiltale took just 17 seconds to get off the mark with John Donoghue registering. The scores were tied for the only time in the first half when Keith Keoghan landed the first of his four first period scores from free.

By the time Keoghan sent over his second pointed free, Kiltale had registered five scores from play with as many different men getting on the scoresheet.

For the champions seven different players pointed in the opening half including corner-back James Kelly. The opening goal arrived 25 minutes in with full-forward Benny Dixon finishing expertly when latching onto Kevin Ryan’s assist.

All bar one of Kiltale’s first-half scores came from play while Regan landed a 65 in the last action of the opening 30 minutes.

Killyon’s only score from play came in the 28th minute with David Raleigh sending over from distance with the help of Brendan Quinn.