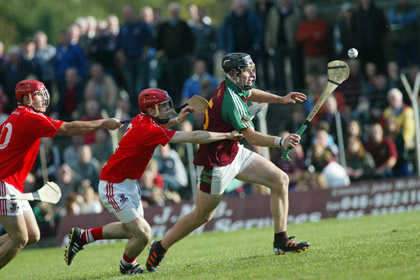 Kiltale were emphatic winners over Trim in the Ted Murtagh Meath SHC final at Pairc Tailteann on Sunday.

Apart from brief lulls Kiltale dominated throughout and chalked up 26 scores with nine different players contributing to this impressive success.

Both teams arrived at this stage on the back of five straight wins which suggested the likelihood of a close contest. Kiltale’s superiority ensured there was to be no nail-baiting contest.

Team captain Peter Durnin also registered five points from play while his industry took to all part of the Trim half.

When Trim got to within six points of the men in maroon shortly after the restart, Kiltale’s response flatlined the contest. The highpoint was Anthony Forde’s 43rd minute goal following a searing run through the opposition rearguard.

Regan chipped in with a trio of points (two from play) while Stephen Donoghue’s second score started the sequence going.

Trim captain James Toher led by example complimenting admirable work rate with 10 pointed frees. Only two other Trim men registered and Luke Moran’s 49th minute effort was one of the scores of the game.

That left the board reading 1-17 to 0-8. In the final quarter Kiltale outscored Trim by 0-8 to 0-2 with team captain Peter Durnin completing their tally with two points deep into stoppage time.

Leading by example team captain Peter Durnin pointed Kiltale in front within 50 seconds of the throw-in. He central to Anthony Forde’s score that doubled his side’s advantage. Mark O’Sullivan was also involved in that productive move.

Playing with the sun at their backs and towards the town goal, Kiltale didn’t let up and were 0-5 to 0-1 ahead after 12 minutes when Stephen Donoghue became their fourth scorer.

All bar one of Trim’s first-half tally came from James Toher frees. Alan Douglas’ 13th minute effort was the sole scoring contribution from another player in red in the first-half and left the board reading 0-5 to 0-2.

When John Andrews’ men registered again, Kiltale were into double figures on the scoring front. By half-time they had seven different scores. The industry that led to the scores was also notable.

The pick of Kiltale’s first-half points were a brace from play from distance in quick succession at teh start of the second quarter from Padraig Kelly. Brian Gilsenan’s men moved seven points clear on two occasions coming up to half-time. Their lead was up to eight in the second minute of stoppage time when Jack Regan landed a free from about 10 metres inside his own 65.

There was still time for Trim to pull one back with Toher landing his fifth point of the half in the last action before the break when Kiltale led by 0-13 to 0-6.

Trim the experinced Joey Toole for the restart and he went close to pointing a sideline cut after Toher sent over another free. The men in red wasted some more chances before Kiltale reasserted themselves and coasted to their fifth title and first since 2012.

Photograph and match report via HoganStand.com.