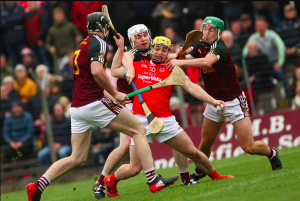 Not much room for Trim’s Neil Heffernan as Philly Garvey, Iarla Hughes and Ronan Ryan close in during the Meath SHC final at Pairc Tailteann. Photo: Hogan Stand.

Kiltale made it five SHC titles in a row when finishing with 10 points to spare over neighbours Trim in the decider on Sunday at Pairc Tailteann.

The final margin doesn’t reflect the opening 45 minutes. The scores were tied seven times before the three-quarter mark. From there to the end Kiltale outscored Trim by 1-8 to 0-1.

A Peter Durnin free broke the deadlock and the same player quickly doubled Kiltale’s lead from a free.

The Kiltale number 13 was prominent, having replaced Jack Regan towards the end of the third quarter.  Durnin finished with eight points to his credit.

His accuracy helped Kiltale out significantly. The champions totaled 10 wides, eight in the third quarter.

Just four points separated the sides, though momentum was with Kiltale, with 54 minutes gone. Then man-of-the-match Ronan Ryan sent in a long delivery that Ross Ryan finished from close range while on his knees.

Trim bidding to complete a hat-trick of titles, having lifted the JHC and MHC crowns earlier in the weekend, lined out without James Toher.

In the first-half, the underdogs had whatever assistance the squally wind offered. Two of their nominal frontline, Cian Lee and team captain Alan Douglas, operated in deep roles.

A Brian Dowling free pointed Trim into an early lead. It was soon cancelled out by a similar score from Kiltale’s number 15, Jack Regan.

A Diarmuid Higgins point from his own 65 put Trim in front. Scores were tied four times in the opening quarter. A Cathal McCabe effort from play moved the champions two points clear for the first time.

A Damian Magee point kept the challengers in touch. Cian Lee pointed from the stand side, about 45 metres out, to leave Trim just one point off the pace, 0-6 to 0-7 with 22 minutes gone.

Then came the moment of the half, a brilliant Charlie Ennis save from Cillian O’Sullivan. The sides were tied for the fifth time when Dowling sent over a 65, his fourth of the half with 25 minutes gone.

Trim outscored Kiltale by 0-2 to 0-1 in the final minutes of the half. Alan Douglas (free) and Neil Heffernan moved Neil Cole’s side two clear. Peter Durnin replied for the champions to leave David Troy’s men 0-8 to 0-9 in arrears, with elemental advantage to come.

Kiltale recorded no wides in the first-half while Trim had five.

However, Trim registered first on the resumption with Dowling sending over (free). When same player landed another free moments later Trim were 0-11 to 0-8 ahead.

Suspicions of overcarrying before the award were academic. Jack Regan landed his fifth free before Kiltale struck their first goal with James Kelly creating the opening for Cillian O’Sullivan to restord Kiltale’s lead, 1-9 to 0-11.