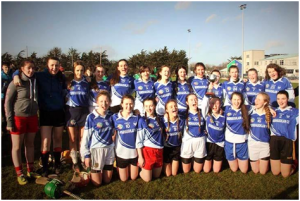 Hero of the day was Kilmessan girl Nadine Doyle, who notched an incredible 5 goals and 5 points of the 6-6 total.

Playing into the breeze in the first half, Clane started the brighter and had 3 points on the board before Nadine scored an opening free for Dunshaughlin.

The Clane girls were dominant in mid-field at this stage and added a further goal and a point before a speculative shot from Megan Thynne ended up in the Clane net keeping Dunshaughlin in the game.

Luckily for Dunshaughlin Nadine was in top form at had 2-2 more on the board before halftime leaving the score 3-3 to 1-7, Dunshaughlin with a slender 2 point lead facing into a strong breeze in the second half.

Things looked ominious when the Clane girls had leveled matters in their first two attacks in the second half.

Dunshaughlin goalie Rachel Duffy made some vital saves at this stage turning two goal bound shots over her crossbar to keep Dunshaughlin in the game.

In was at this stage that the Dunshaughlin girls determination and fighting spirit came to the fore with midfielders Megan Thynne and Kiltales Fia O’Brien getting to grips with their opponents providing the ammunition for the peerless Nadine to go on a scoring spree.

Winning every ball that came her way she scored 4 goals and 2 points between the 10th and 20th minute to leave Dunshaughlin with a comfortable lead.

The Clane girls enjoyed plenty of possession but with Caoimhe Rooney at centre-back, Joelle Smyth at full-back and Fia now playing in a defensive position repelling the attacks the scores weren’t coming for the Kildare Girls.

Two late goals left the final few minutes tense but the Meath girls held out to earn a terrific win.

They now go on to represent Dublin in the All-Ireland series.

Everyone at the club wishes Fia O’Brien and the Meath Camogie minor team and mentors the very best of luck in the Leinster Final this weekend!

The girls take on Laois on Sunday in Clonad GAA Club, Portlaoise – throw-in is at 12 noon. Best of luck girls!