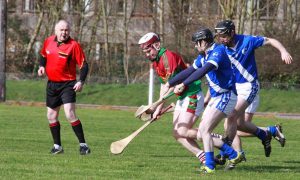 Kiltale face Kildalkey in a gripping semi-final of the 2016 Brendan Davis Cup.

Our Club paid its entry fee at the start of the year to take part in Brendan Davis Cup, and it was accepted.

Meath GAA regulations were passed at the start of the year. Regulation 49 outlined that all senior and intermediate hurling clubs were eligible to take part in the Brendan Davis Cup in 2018.

The Meath CCC made a decision during the year that the winners of the Senior and Intermediate Championships, in football and hurling, would not be allowed to take part in the Davis Cup, Feis Cup, or other Cup competitions during 2018.

This decision was never voted through at a County Committee meeting, as would be required in Rule 3.19(d).

The hurling clubs affected by this would be the winners of the Senior and Intermediate Championships, who would not be known until the 7th October.

After winning the Meath SHC, Kiltale Hurling Club contacted the Meath CCC – verbally and through emails – requesting to be included to the Brendan Davis Cup, as other teams were pulling out and giving walkovers which we felt greatly discredited the competition and the man who the competition was in honour of, Brendan Davis.

At this point the competition was only at the quarter final stage. Kilmessan vs Ratoath had yet to play, with the winners facing Trim in the semi-final. On the other side of the draw, Kildalkey had already been placed in the final after a number of walkovers.

We could have easily been included on Kildalkey’s side and played them in the semi-final, as Trim had been introduced into the semi-final on the other side.

Our exclusion from the competition was questioned by our club at a hurling meeting in Dunganny. We got backing from the floor by other clubs who felt that we should have been included.

However despite these numerous attempts we had no success. The competition was been rushed along to the final stages so we were left with no option but to take our case to Leinster Council.

We also pointed out to Meath CCC that we had 32 players togged out for the county final, as well as an intermediate team. We had a full month between winning the Meath SHC (7th Oct) to our first game in the Leinster IHC (4th Nov), and needed games to play in between. We also argued that we had enough players to field teams even without placing extra strain on our stronger players.

The Leinster Council heard our case and found Meath CCC to be in breach of Regulation 49 and Rule 3.19(d).

They felt that we should have been allowed to enter a team as we had so many available players; because the competition Regulation 49 said the Cup was open to all Senior and Intermediate clubs; and because we had paid our entry fee.

They also stated that the only way the Meath CCC could change a competition structure during the year was to have it voted through at a County Committee meeting.

We wish to stress that the Leinster hearings committee did NOT make a decision that the 2018 Brendan Davis Cup be declared “null and void”.

Rather, under Regulation 49 and Rule 3.19(d), the Leinster Council simply directed that the Meath CCC decision to exclude Kiltale from the 2018 Brendan Davis Cup be annulled.

The decision regarding the running of the Brendan Davis Cup in 2018 would therefore continue to rest with Meath CCC, but Kiltale must be included.

Our Club feels that this cup, in honour of the great Brendan Davis, has been discredited from the start because of the timing of the competition, which resulted in teams having to pull out, and also the fact that the county’s Senior champions had been barred from entry.

Kiltale Hurling Club have been in contact with the Davis family outlining our disappointment on being excluded. We explained why we felt it was necessary to take our case to gain entry to a Cup in honour of a true hurling man.